Selfie is a new attack on TLS 1.3 that was published last week by researchers Nir Drucker and Shay Gueron. The paper’s name is inspired by its core finding:

A Client talking to itself could be seen as having its own messages being “reflected” back at it, hence the name “Selfie”. Here’s a useful sequence diagram from the paper that illustrates what the attack looks like: 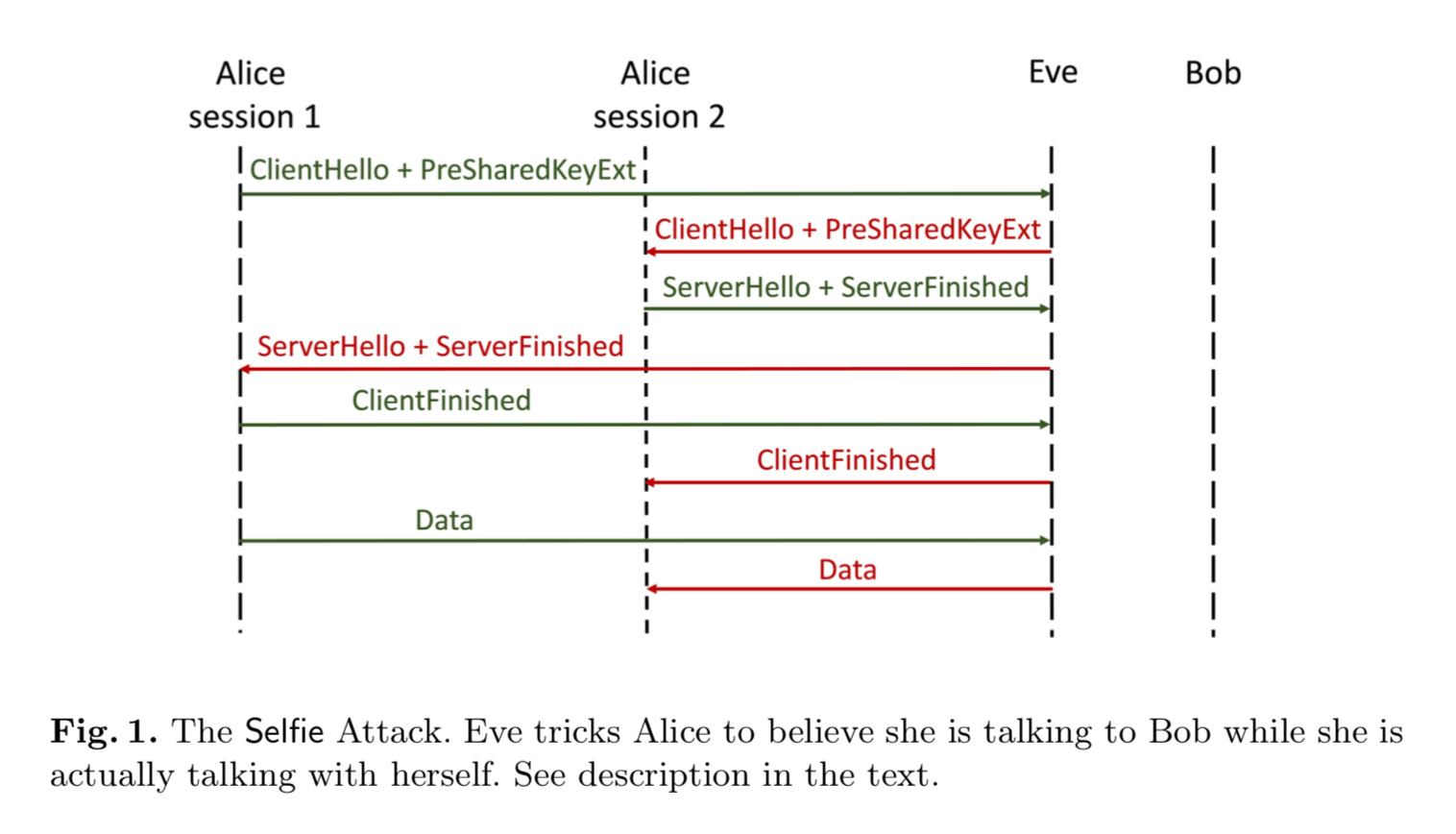 The Selfie authors then suggest three ways for preventing this kind of attack across all sorts of secure channel protocols that could potentially be affected. Their preferred way is to generate a unique identity for every principal, make sure that identity is known across the network, and then have each pair of principals mix their identities into each session they end up establishing. It’s not a cheap fix: guaranteeing identity uniqueness isn’t trivial, and authenticating identities, especially out-of-band, has long been a troublesome component of secure communication systems.

For TLS 1.3 specifically, however, their mitigations are easier to apply: the Selfie authors recommend using external PSKs only in conjunction with server certificates. A better solution, they continue, would also be to simply forbid the sharing of a specific PSK between more than one Client and Server. I’m personally pessimistic about how enforceable the latter recommendation would be in real-world deployments. But the former is fine.

Now, I’d like to get this out of the way before we continue: I would argue that Selfie has a very limited impact on the practical security of TLS 1.3 in a real-world setting, due simply to the fact that Clients are very rarely seen having fruitful TLS sessions in which they talk to themselves. Once the Client’s message is reflected back unto itself, the most likely thing that will happen is that the session data stream will be considered corrupt by the application layer, and the entire session will fall over.

However, Selfie remains a perfectly valid attack on TLS 1.3’s PSK-based mutual authentication logic. It’s fair to say that it should have been caught earlier by the TLS 1.3 WG and dealt with appropriately.

At first glance, Selfie does indeed seem to fly in the face the unprecedented effort to formally verify TLS 1.3 as secure.

Formal verification has traditionally meant hand-written, game based proofs. But in recent years it has increasingly become a methodology where automated, tool-assisted verification is accomplished by describing protocol flows under either the symbolic model (e.g. using ProVerif/Tamarin) or the computational model (e.g. using CryptoVerif).

In the case of symbolic verification can allow for the rapid evaluation of real-world protocol flows against specific security queries under an active attacker (“is the authenticated key exchange forward secure?” “is the first message confidential?”). In the computational model, full game-based proofs can still be obtained, similarly to hand proofs, while being more easy to link to specific protocol flows across well-defined principals.

And yet in spite of all of this unprecedented effort to prove the security of TLS 1.3, Selfie still happened! As the Selfie authors point out in Section 6 of their paper:

The Selfie attack comes as a surprise, since TLS 1.3 is the first TLS version that was designed alongside with security proofs, e.g., the studies in {3, 5, 6, 7, 8, 9, 12, 13, 14}. This is even more surprising since the Selfie attack is actually a manifestation of a reflection attack that is already known in other contexts.

The Selfie authors then delve into existing work on formally verifying TLS 1.3 to try and find out why Selfie wasn’t spotted. In summary, they correctly conclude that the protocol flows that were envisaged by the formal verification efforts for TLS 1.3 weren’t comprehensive enough to catch the case where a Client uses TLS 1.3 with an external PSK and then proceeds to talk to itself for the entire session.

…because these formal verification efforts were geared towards eliminating more damaging classes of attacks.

Selfie is a legitimate and interesting attack on TLS 1.3. The Selfie paper is written with care and attention to detail. It’s a finding that deserves to be published.

But I think it’s important to explain why Selfie’s existence doesn’t meaningfully reflect on the status of the formal verification efforts for TLS 1.3.

Selfie is a finding with very limited practical implications and that relies on a protocol flow for TLS 1.3 (a Client talking to itself) that, in real-world usage, would almost certainly immediately lead to a corrupt data stream. When the formal modeling of TLS 1.3 was moving on with full steam, the security community was still reeling from the disclosure of protocol bugs and vulnerabilities that belong to entire classes of attacks that are more serious than the one which Selfie finds itself in.

Forget a Client being misled into talking to itself: the focus was on ruling out different classes of bugs that were comparatively critical in nature:

These are the sorts of disastrous attacks that formal verification for TLS 1.3 was paying attention to ruling out: total session compromise caused by ill-defined protocol state machines with a way-too-huge state space. Protocol failures caused by weak hash functions, Diffie-Hellman groups or long-term keys.

The list goes on. Every bullet point on that list was linked to a critical weakening in the real-world security of TLS, and this is the sort of dangerous stuff that formal verification was focusing on ruling out in TLS 1.3. Indeed, some of TLS 1.3’s formal verification efforts were able to rule out attacks such as Logjam or Triple Handshake even if TLS 1.3 was being run in parallel with TLS 1.2!

Every one of the formal verification studies cited by the Selfie authors had this sort of diligent scoping written out for its formal analysis. None of them claim to rule out an attack like Selfie’s, because, given the much more serious classes of attacks the modeling was focused on, none of them produced a formal model for it. As such, Selfie’s appearance can’t really be held as a barometer by which to evaluate the accomplishments of TLS 1.3’s formal verification efforts.

Our models could still have been more comprehensive.

That being said, it’s still fair to recognize that, at least when it comes to our own formal verification efforts for TLS 1.3, we still could have produced models that were more comprehensive and that better captured the external PSK protocol flows. In our work, we modeled TLS 1.3 session flows in both the symbolic and computational model, using ProVerif and CryptoVerif. Here’s where we lacked precision sufficiently such that Selfie wasn’t detected:

While it’s true that formal verification for TLS 1.3 would have done better to be comprehensive enough to rule out Selfie, it shouldn’t come as a huge surprise that it didn’t. In fact, one could even argue that formal verification is the reason why attacks on TLS 1.3 protocol flows have been restricted to scenarios like Selfie, i.e. flows that would simply never occur in a real-world setting. At least when it came to our own research, however, we were focused on making sure that the catastrophic bugs that have plagued TLS 1.2 and prior can be, this time, hopefully steered clear from.